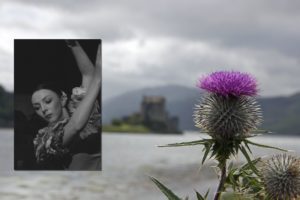 The Company name causes some giggly tongue twisting disasters! So, we thought we’d help out with the pronunciation!

The origin of the company name derives from the old Scottish Gaelic language mixed with Spanish influences.

“Slanjayvah” is our phonetic attempt of the original Scottish Gaelic spelling, “Slàinte mhath”, which signifies a toast to your good health and a variety of good wishes such as:

Here’s to life! All the best! Cheers!
The toast is SLAINTE MHATH (Good Health) …and the response is SLAINTE MHOR (Great Health).

“Danza” is quite simply “Dance”, in Spanish – which we felt fitted pretty perfectly to how you would say dance in the old Scottish and Gaelic languages – “Danssa”.  (However, often in Spain the spanish “z” is pronounced as “th” and so the confusion continues when someone pronounces this as Dantha).

Look out for our soundclip coming soon!